Maria Eichhorn was born in 1962 in Bamberg Germany. She currently lives and works in Berlin. She studied at the Berlin University of the Arts and has been teaching at the School of Art and Design in Zurich since 2003. She has had many solo exhibitions since 1986, including shows in Amsterdam, Berlin, Berne, Barcelona, Warsaw, Zurich and Tokyo. She has taken part in group exhibitions in London, Paris, Sydney, New York and Yokohama. She participated in Make Everything New – A Project on Communism, Book Works, London (2006), the International Istanbul Biennial (1995 and 2005), Documenta 11 in Kassel (2002), Skupltur Projekte in Munster (1997) and the Venice Biennial (1993). She also published Restitutionspolitik/Politics of Restitution, Munich/Cologne(2004); CAMPUS, Political Responsibility/Emancipazione Politica, Bozen/Cologne (2005); Publishing the fact that something will remain unpublished, Cork/Cologne (2006). 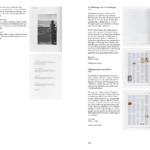