Elio Marchegiani was born in Syracuse in 1929 to Sicilian parents. In 1934 his family settled in Livorno, where he spent his childhood and youth. He began painting as an autodidact. Following the family tradition, he received a classical eduction and enrolled at the Law Faculty of the University of Pisa. However, Mario Nigro's acquaintance made him change his path. He began to organize exhibitions and cultural events, but it's his friendship with Gianni Bertini that convinced him to leave the province behind and pursue artistic adventures in cities such as Paris, Milan, Rome and Bologna. The island of Favignana is where he preferred to spend the summers. For several years now he has been living in Pianoro Vecchio, a residential area on the hills, on Via Toscana, alternating the summers in Misano Adriatico and the island of Ischia. http://www.eliomarchegiani.com 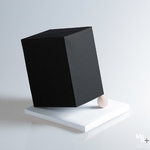 Monolite in bilico consists of a block of slate or lava stone resting on its edge on top of an egg made of travertine from Trapani, and placed on a pedestal of white cement destined for an open space in the city of Gibellina. The exact placement and…
View item