The residency of Gorgona in Brunnenburg

In March 1991 the collector and publisher Francesco Conz, in collaboration with the Muzej Suvremene Umjetnosti - MSU of Zagreb, invited a few artists who had been part of Gorgona, the Croatian Croatian avant-garde group active between 1959 and 1961, to an artistic residency at the castle of Brunnenburg in Merano, Italy.

During their residency, the five artists created thirteen works of art as well as fifteen hand-made copies of each work. All of which were created on the same size of paper (30x42 cm), as used by the artists who participated in the residencies for La Livre edition.

However, contrary to their initial intentions, the group distanced itself from Ezra Pound because of the possible political implications conveyed by his figure. Neither La Livre nor any single issue that should have included the works created by the artists of Gorgona during their residency were ever completed and therefore published. 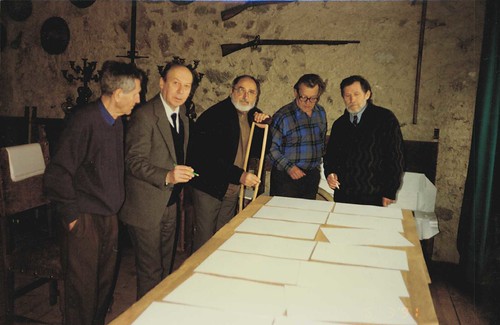