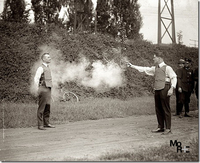 Invited to take part to the second edition of the performance festival curated by Adriana Rispoli and Eugenio Viola, Corpus. Art in action, 7-26 June 2010 at MADRE Museum in Naples, Galindo focused on the social problems that affects the city. As a result, the artist’s project recalls a kind of training practiced by the Camorra to shoot a person who is close to his killer. The performance was supposed to happen like this: the artist, wearing a bulletproof vest, is locked in a room with a man standing a meter and a half to her. The man is armed with a gun and he shoots at the artist after asking her for three times, in English: “Are you afraid?”. The audience attends in a adjacent room, where he can only listen to the sounds coming from the performance. Immediately after the shot the artist and the man come out (the man from a side door, without being noticed) and the room remains empty and accessible to the public. According to Galindo, the project was refused because considered too dangerous.
Read more.